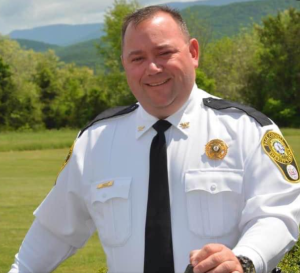 Chad Cubbage is a lifelong Page County resident who graduated from Page County High School in 1994.  As soon as he graduated high school, he was offered a job with the Page County Sheriff’s Office.  In August 1994, at the age of 18, Sheriff Cubbage attended the Central Shenandoah Criminal Justice Training Academy and was a member of the 73rd Basic Class.

​Chad Cubbage has served the citizens of Page County for over 20 years in his law enforcement career.  He worked for the Sheriff’s office for 10 years and then went to the Shenandoah Police Department, where he worked through the ranks, to the rank of Lieutenant, from 2005 to 2015.

​In 2014, Chad announced his intention to run for Page County Sheriff.  He was then elected Sheriff with a victory in the general election in November 2015.  Chad Cubbage now serves as Page County’s 30th Sheriff in his constitutional role as Chief Law Enforcement Officer of Page County.

​Since taking office, Sheriff Cubbage has implemented several new programs for inmates in the custody of the Sheriff’s office, the citizens and community at large, and especially for the youth of Page County; all without increasing his budget.

​Sheriff Cubbage’s vision for the future is based upon over 20 years of law enforcement experience and developing close relationships with Page County communities, Courts, and law enforcement agencies by his servant style of leadership.

​Sheriff Cubbage was re-elected in November 2019 for his second term.  He is up for re-election in 2023.

​Please call the Page County Sheriff’s Office at 540-743-1162 to speak to the Sheriff or schedule an appointment.